Review - The Infatuations by Javier Marias

“No one should set foot in [Spain] without reading Javier Marias, the resident genius among the novelists…his latest, the Infatuations, is wonderful.” – Daily Telegraph

And so with this sentiment in mind, it seemed clear that my homage to last month’s visit in Spain would be Javier Marias’s arguably most popular book, The Infatuations. Having published extensively, and lectured at various top-tier universities, Marias is one of Spain’s best known contemporary writers. Margaret Jull Costa, the translator, has worked on pieces by Jose Saramago and Bernardo Atxaga. Himself a translator, it seems reasonable to assume that the integrity and intention of the work have been effectively preserved during the translation process.

The story follows Maria Dolz, who works in a publishing house with a particular and ironic disdain for authors and their bothersome requests. She regularly visits a café and, from afar, falls in love with the perfect couple who always sit a few tables away. However quite suddenly, she discovers that the husband has been brutally murdered on the streets of Madrid. Maria gets caught up in a murder mystery/love story with the widow and her deceased husbands best friend. The book explores big questions about love, death, and morality among the slowly unfolding mystery surrounding the murder. 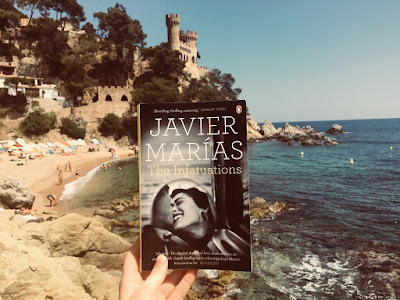 An interesting point to start with this book is that it is written entirely from the point of view of a female as seen through the eyes of a male author. Arguably her submissive and compliant tendencies do seem problematic, especially when taking the former into account. However, the character is also acutely self-aware of her own tendencies towards being unassertive and malleable, especially with regards to her secret relationship. Her introspection is one of the most fascinating aspects of the novel as it reads almost as a stream of philosophical consciousness. She doesn’t deny being in love with someone who will most likely never love her back and who considers her but a temporary distraction. She does not delude herself into expecting more but equally admits and seemingly enjoys the power imbalance whereby he is always the instigator.

“…we [women] think men will change their mind or their beliefs, that they will gradually discover that they can’t do without us, that we will be the exception in their lives or the visitors who end up staying…” (p. 118-119)

It seemed slightly disappointing in that accommodating female characters are the ones most usually written by male authors however it should also be taken into account that her lack of action and willingness to disrupt the lives of others brings back themes of moral ambiguity and uncertainty that are a key feature of Javier Marias’s books.

“…I though in order to justify myself: “No, I don’t want to be an accursed fleur-de-lys on his shoulder, which betrays him and points the finger and prevents even the most ancient of crimes from disappearing; let the past be purely dumb matter and let things simply fade and hide themselves away…” (p. 345)

“Men, however, tend to strive to achieve quite the opposite effect, although they often fail: to leave branded on the skin a fleur-de-lys that perpetuates and accuses and condemns, and possibly unleashes more crimes. That would probably have been my intention with anyone else, or with him too, had I not fallen stupidly and silently in love…” (p. 345)

At times, the book does become heavy with introspection and the philosophising of morality, however it is also this exact quality that makes the novel unique and that many others have praised. The sensation of secrecy and ambiguity comes through very clearly as the motives of these individuals and their feelings towards actions taken remain uncertain. I genuinely enjoyed that none of the characters were clear cut hero’s and neither villains, in that Maria while upset by the notion of murder, does not care much about the eventuality and justice. The novel is written, in its entirety, about the grey areas of life, even the most complicated and life altering events are shrouded in ambivalence. It seems an exploration as well as a commentary on all those murders we never hear about and no one ever answers for.