Kamila Shamsie, the author of Home Fire, grew up in Pakistan and now lives in England. Home Fire is a modern retelling of Antigone by Sophocles and was longlisted for the Man Book Prize in 2017. Having read Sophocles is not a prerequisite for comprehending the complexity of the novel, however, it does allow for an alternative perspective as well as another layer of analysis with respect to their similarities and differences.

Themes of terrorism and the relationship between Muslim immigrants and their host countries has become a popular and sensationalised topic in the media and literature. However, Home Fire is elegantly able to dissect questions of faith and patriotism without falling into the trap of generalizations of superficial experiences. The story follows a family made up of Isma, the older sister, who is executing a PhD in the US and the twins Aneeka and Parvaiz, the latter of who follows in the footsteps of their jihadist father. Aneeka becomes embroiled in a relationship with the son of the foreign minister in the UK with dubious intentions. Towards the end of the novel, the truly dramatic nature of Sophocles emerges through Shamsie’s writing, as Aneeka attempts to bring home the body of her twin and give him the burial rights he deserves.

I read the book with great anticipation at the turn of every page as the novel is divided into various sections, separating the perspectives of each of the siblings.  It provides an in-depth and emotionally intuitive representation of the British Muslim experience even within the limited number of words. What attracted me to the novel was its insight into the immigrant’s experience, particularly in the culture of surveillance and a community of suspicion as has been created by counter-terrorism measures and the media. 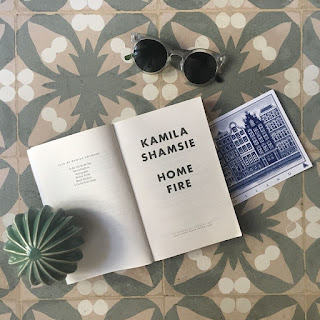 “In fewer than 300 pages, it managed to do all the things I want novels to do – tell me something about the world, give me a tiny glimpse into the otherness of others, and, most of all, give me that ache of longing as I turned the last page and realised I would never meet these characters again.” – Tahmima Anan, Observer

The uniqueness of the novel is its capacity to illustrate various perspectives of the Muslim experience from Isma who remains proud of her faith but feels a debt to her host country, to the young foreign minister who in many ways abandons and betrays his roots in order to gain favour among fellow politicians and drive cultural integration.  As highlighted in the above quote, it provides an insight into an ‘other’ that individuals such as myself cannot begin to understand or even imagine without the provision of such novels. However, it should be noted that in certain sections the language is relatively unpolished and each character is not given an equal chance to portray their experiences.

The book effectively illustrates the complex dimensions of identity, particularly in the current climate however it goes beyond that to illustrate with particular emphasis the issues related to the female immigrant experience. Isma remains an underutilised perspective throughout the novel, however, the responsibilities she took over after the death of her mother, the legacy of her father and Parvaiz’s new affiliations are particularly enlightening. Furthermore, Aneeka’s own dimensions in her relationship and dedication to her twin are put to the test as well as questioned when the foreign minister’s treatment of her, echoes the misogyny of Sophocles’ plays. There are a number of ideas that could be further analysed with deeper discussion, however, I would recommend this novel particularly to newer generations and anyone interested in reaching mutual understanding and seeking to challenge the echo chambers in which many of us live.